THE ONE-OF-ONE 15-LITER ‘LA BOUTEILLE NOIRE’ – HANDCRAFTED IN PARTNERSHIP BETWEEN BUGATTI AND CHAMPAGNE CARBON AND INSPIRED BY THE ONE-OFF HYPER SPORTS CAR ‘LA VOITURE NOIRE’ – IS ACQUIRED BY A BUGATTI CUSTOMER.

Stemming from a collaboration forged in 2018, Bugatti and Champagne Carbon once again combined their decades of expertise and innovation to craft the one-of-one, entirely tailor-made and most spectacular champagne bottle and case: La Bouteille Noire. 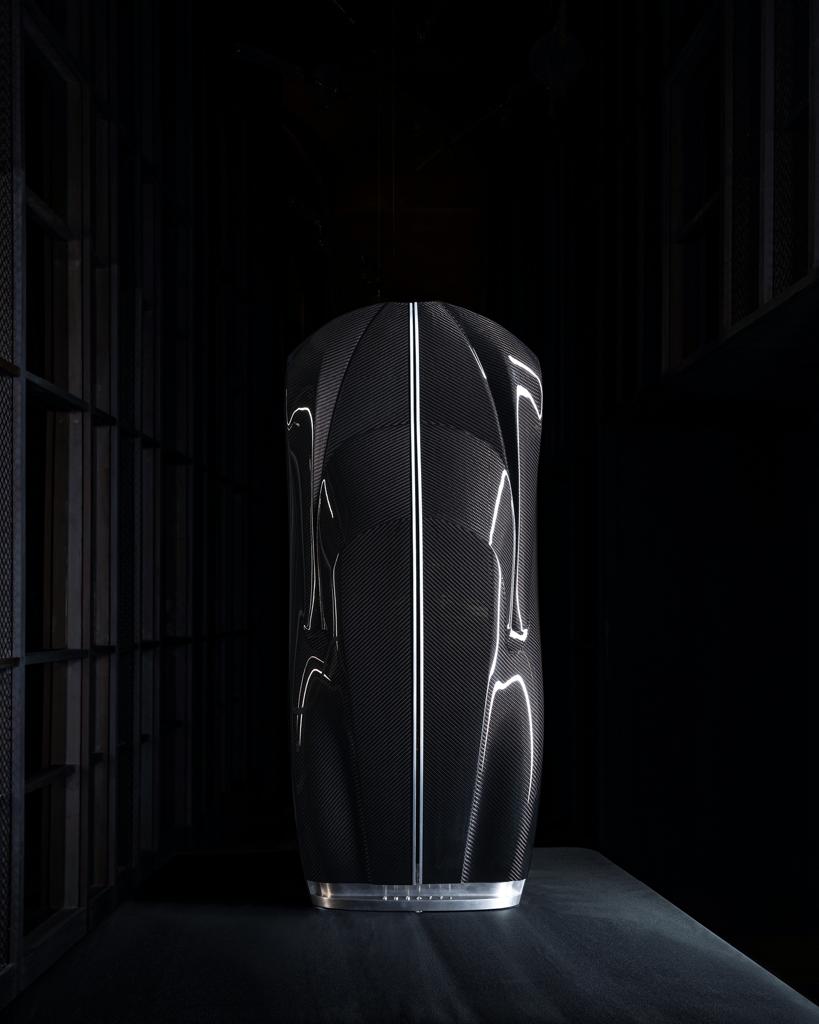 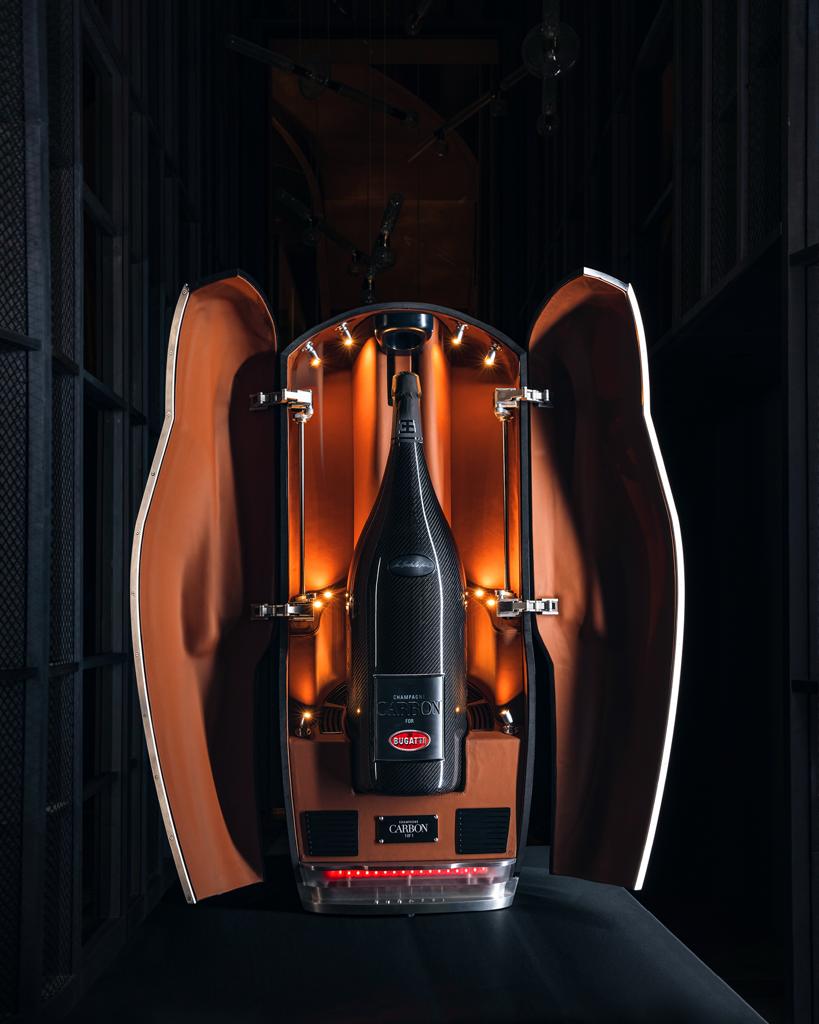 Over more than a century, bugatti has grown its following and customer base across the world, consisting of truly passionate enthusiasts who admire both the brand’s rich heritage and modern-day engineering of its hyper sports cars.  every once in a while, bugatti aficionados and clients are given the rare opportunity to purchase a unique offering – something not standing upon four lightweight magnesium wheels – that is equally as rare and beautifully crafted as the w16-powered products the brand is famous for.

Revealed at an exclusive private event in the heart of England’s capital at The Londoner hotel – the world’s first super boutique residence – La Bouteille Noire took center stage in front of a discerning audience of Bugatti guests and customers. Throughout the evening, Mr. Dripping – world-famous painter and fashion designer – created a live art piece celebrating the partnership of Bugatti and Champagne Carbon. As the highlight of the event, attendees were invited to bid on the unique item, which attracted a number of high value offers before the highest bidder, a long-time Bugatti customer, secured La Bouteille Noire for his private collection.

As with any Bugatti purchase, there is no limit to opportunities for customization, enhancing upon excellence to reflect personal taste is fundamental to the Bugatti experience. La Bouteille Noire is no different, and its new owner will be working with Bugatti’s Director of Design, Achim Anscheidt, to incorporate further unique design elements to make it a truly original creation. 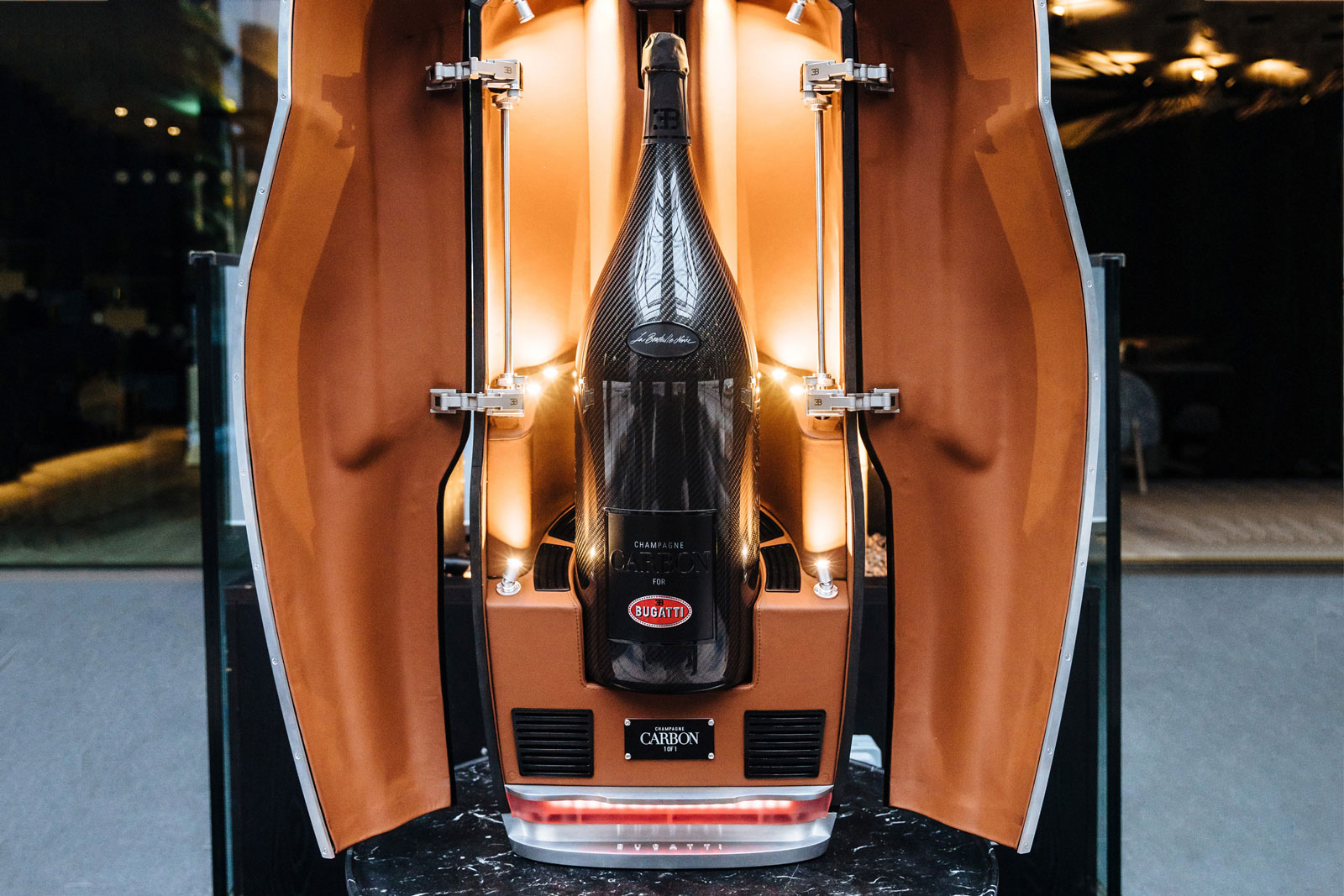 The “Bouteille Sur Mesure” program is an entirely new experience in the world of viniculture, bringing together the finest vintage wines of Champagne Carbon with the endless possibilities of Bugatti Sur Mesure; the official customization program offered to all Bugatti customers. 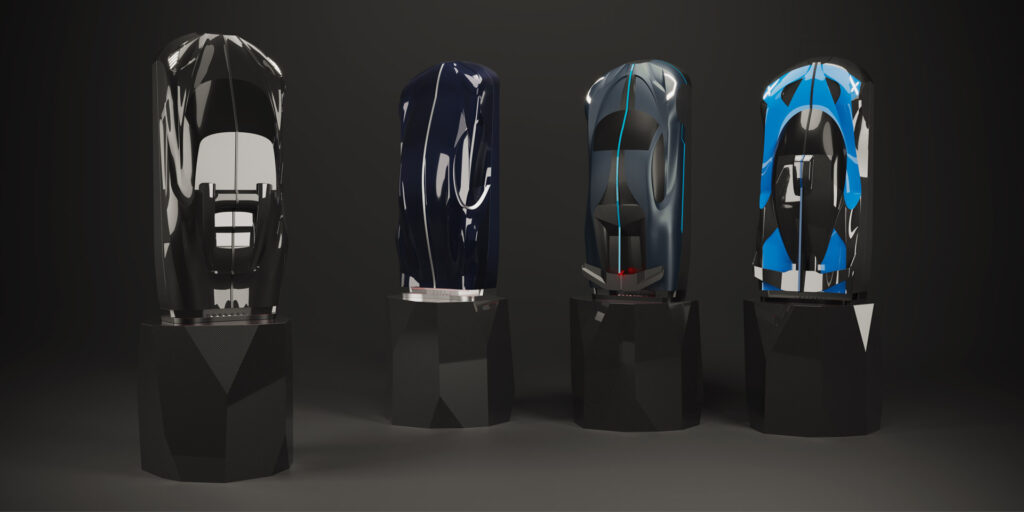 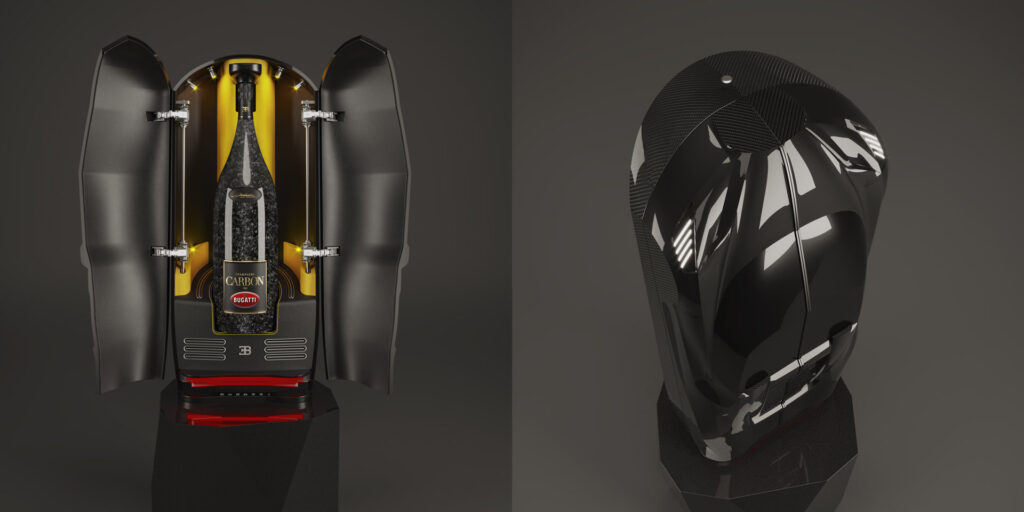 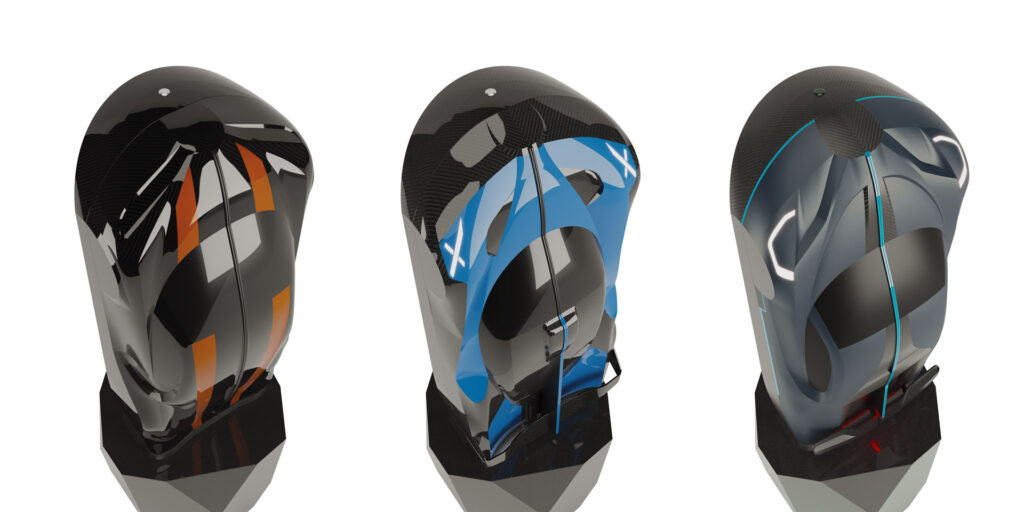 Inspired by Heritage and Innovation 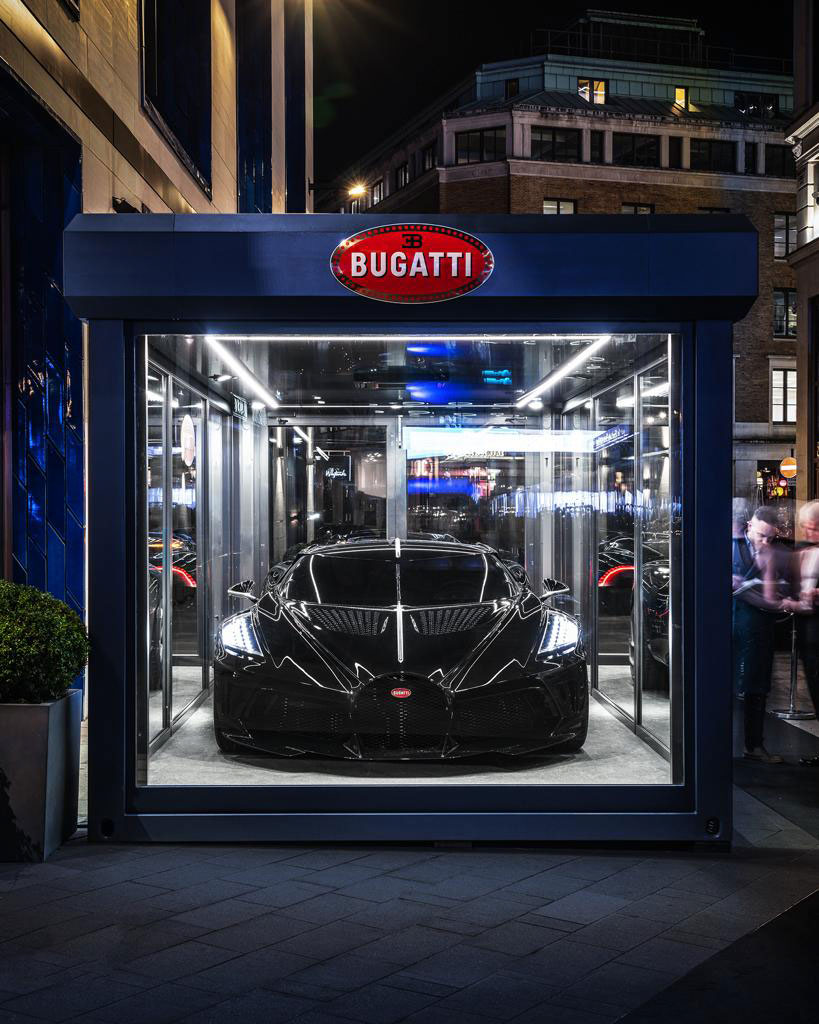 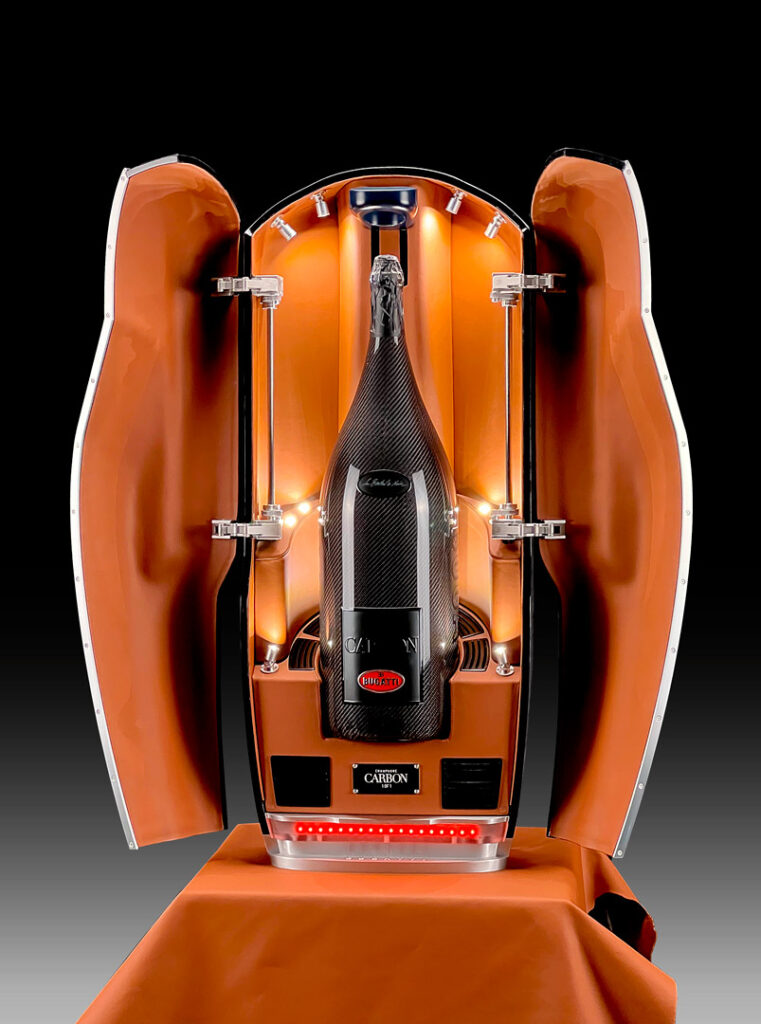 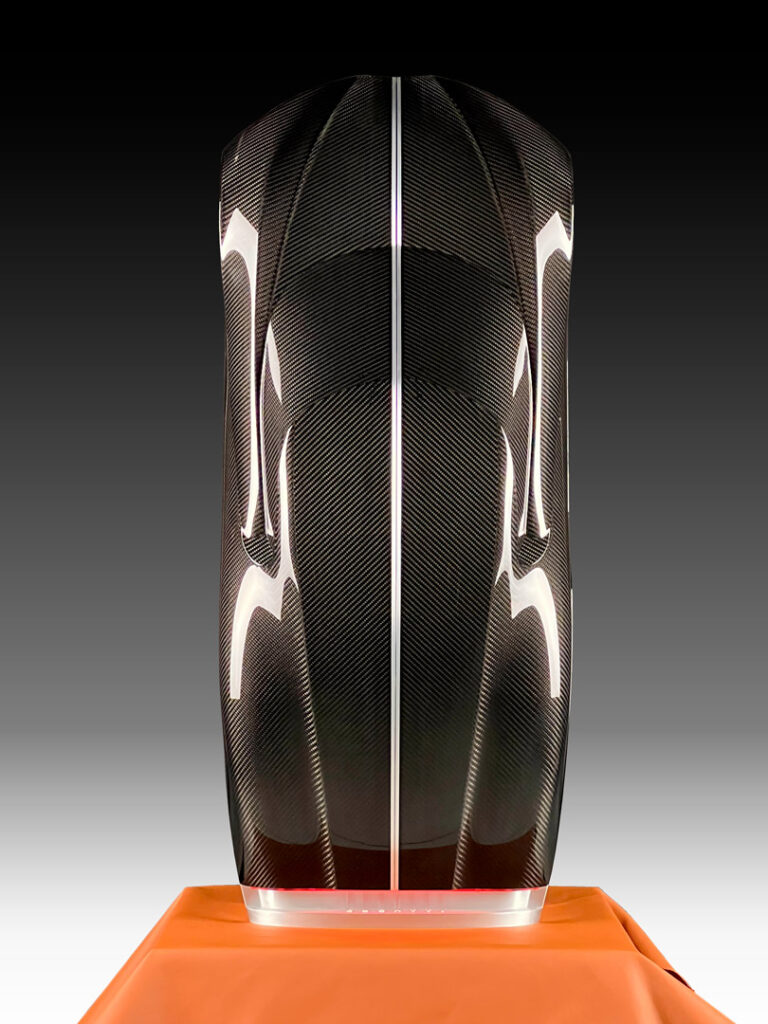 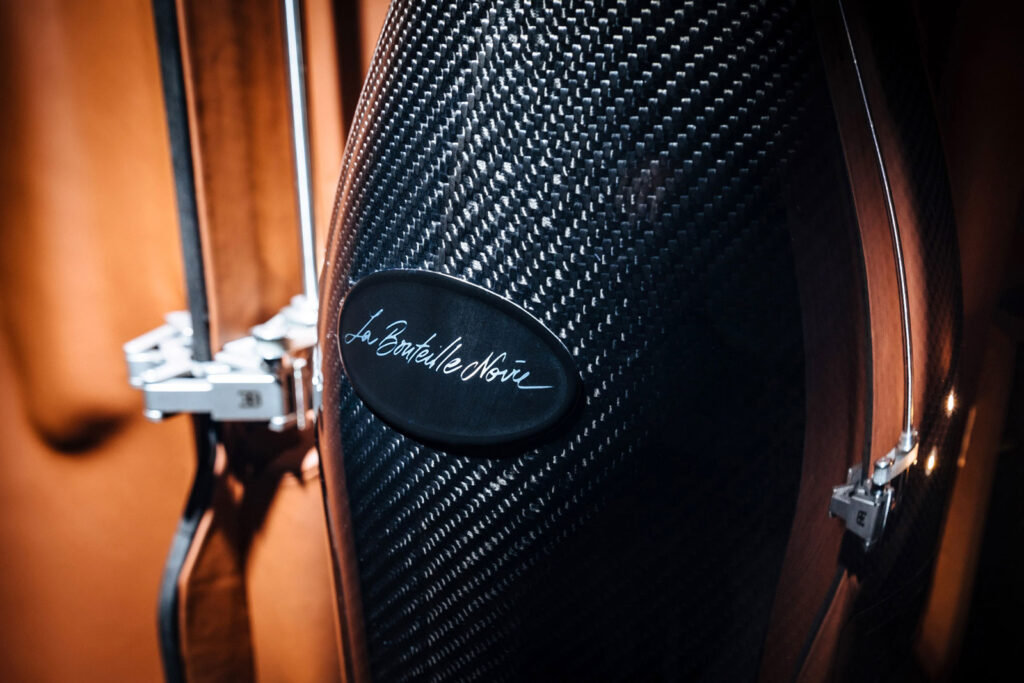 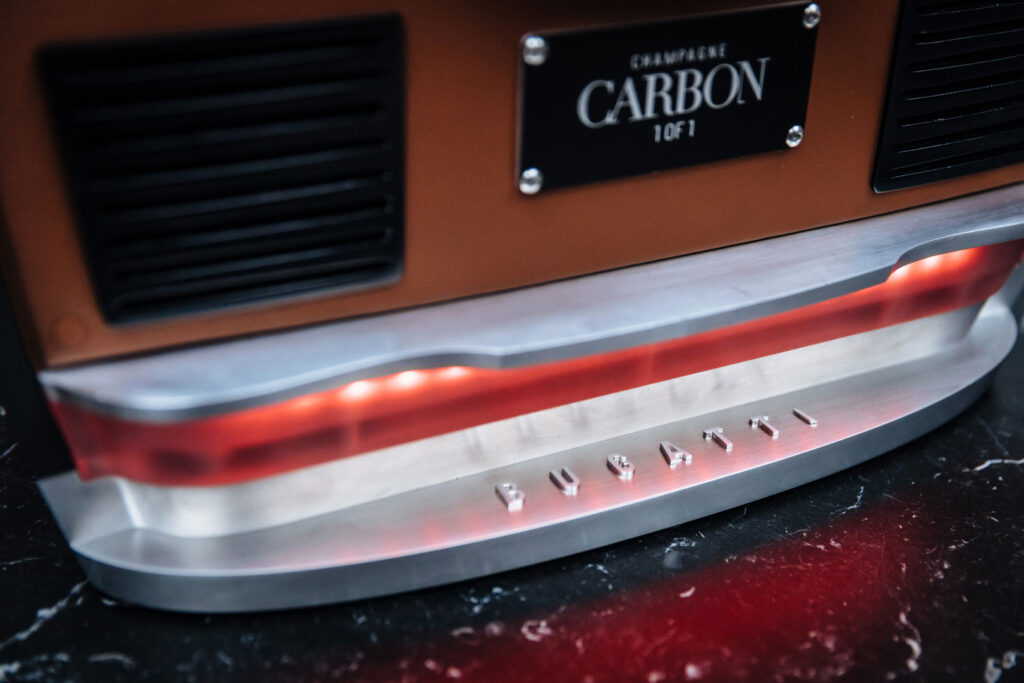 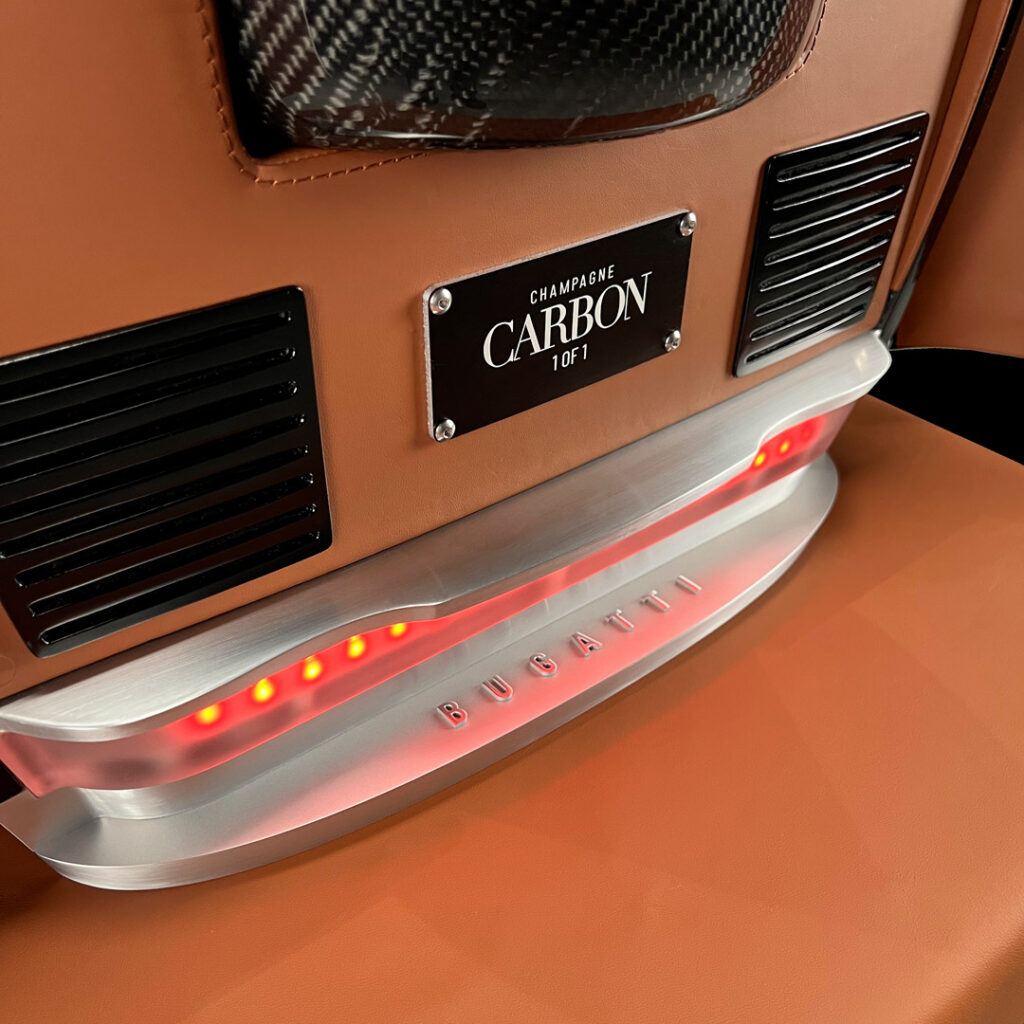 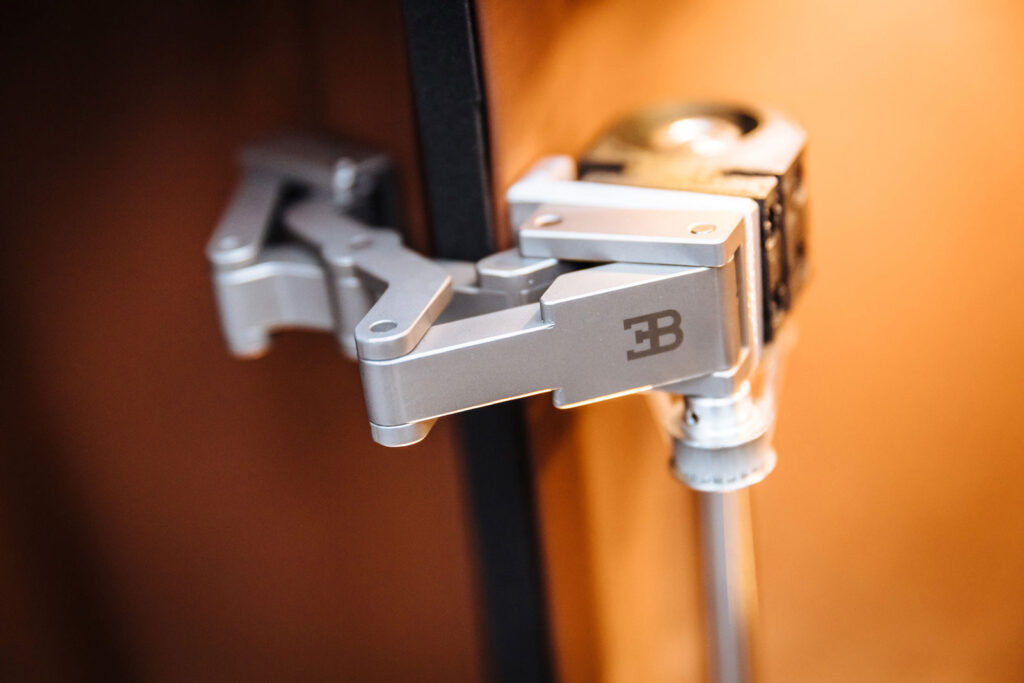 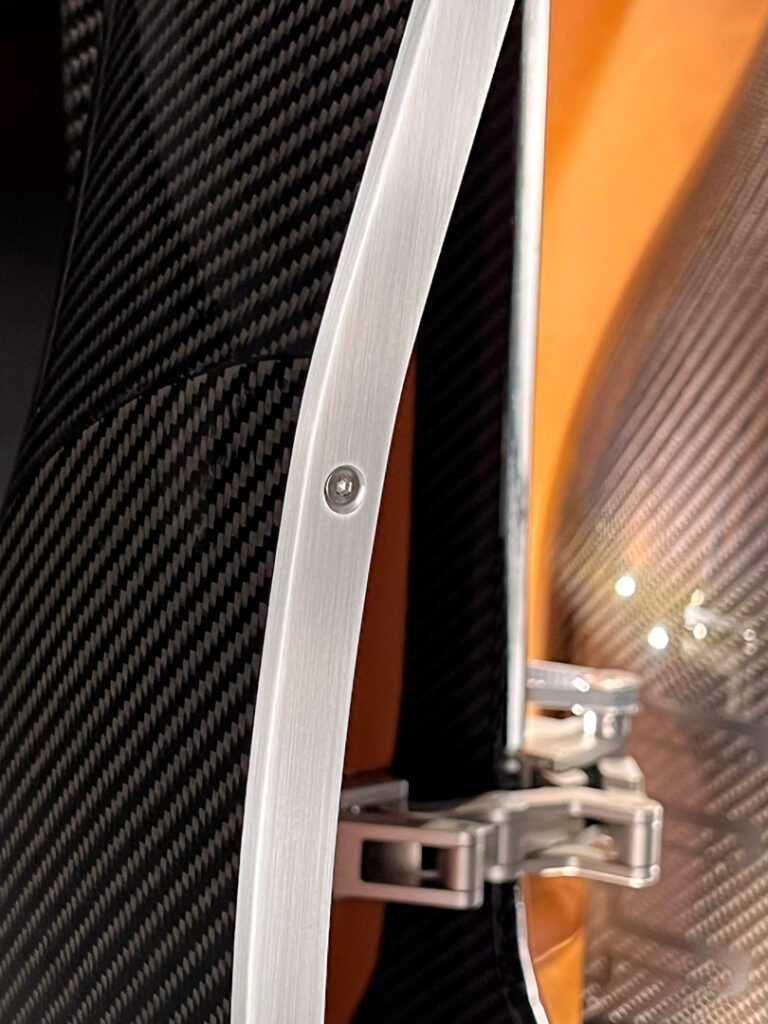 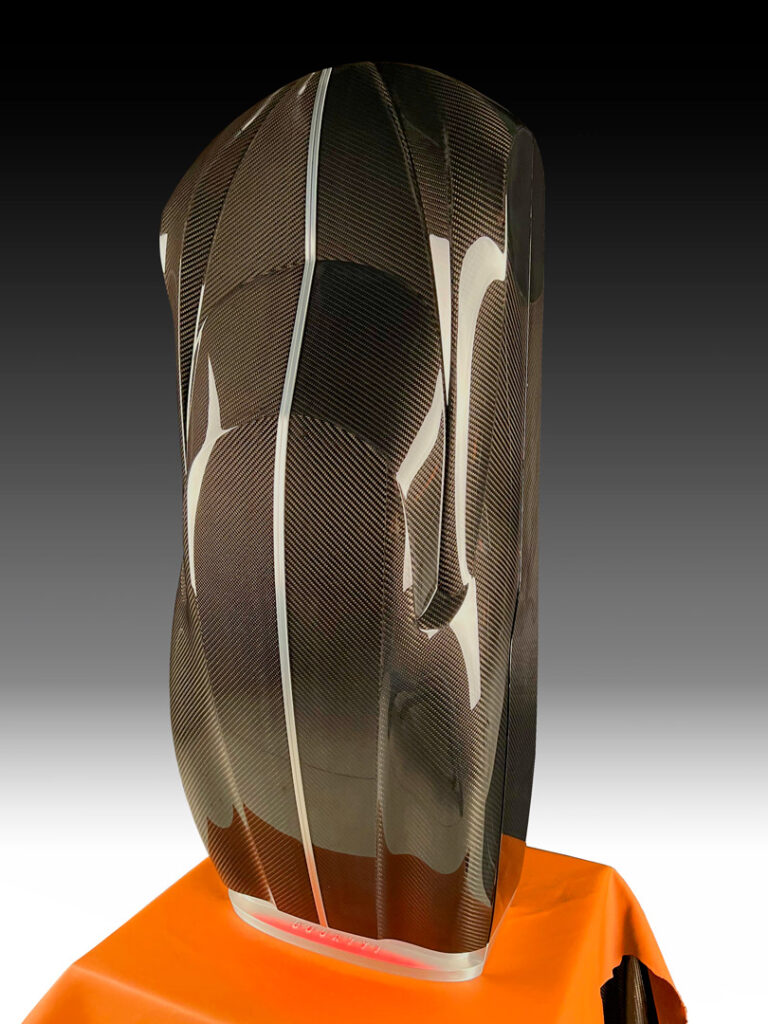 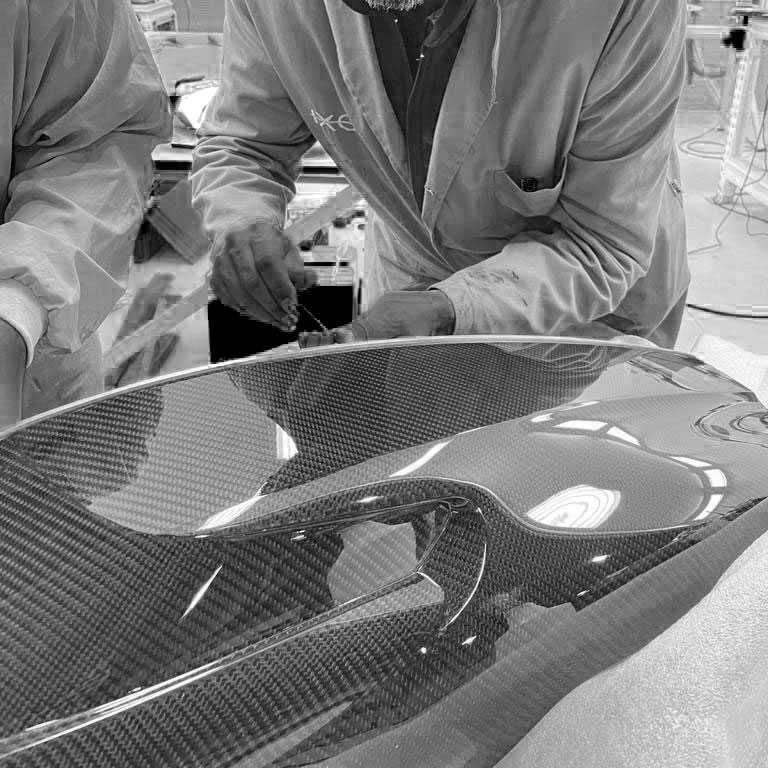 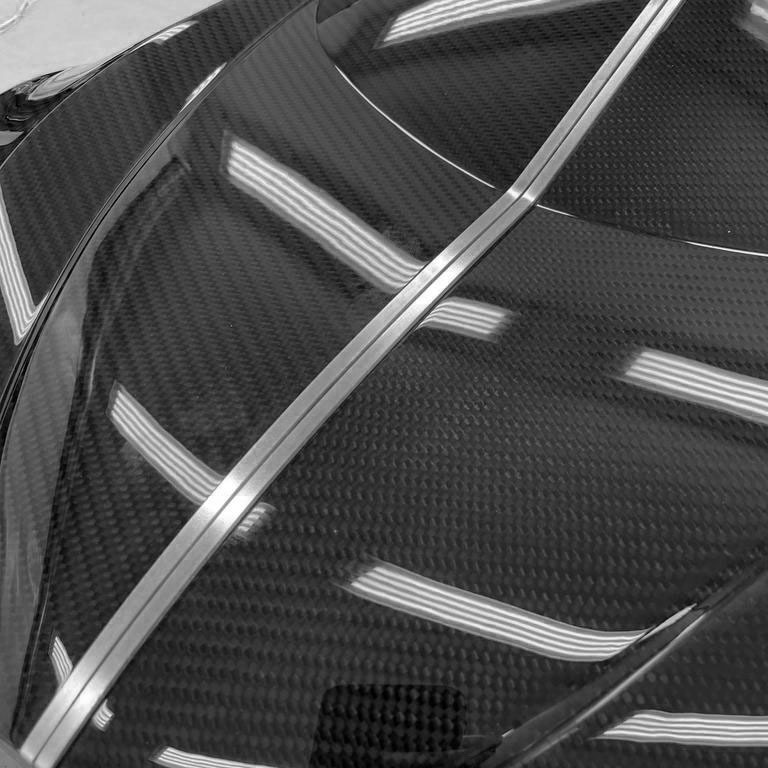 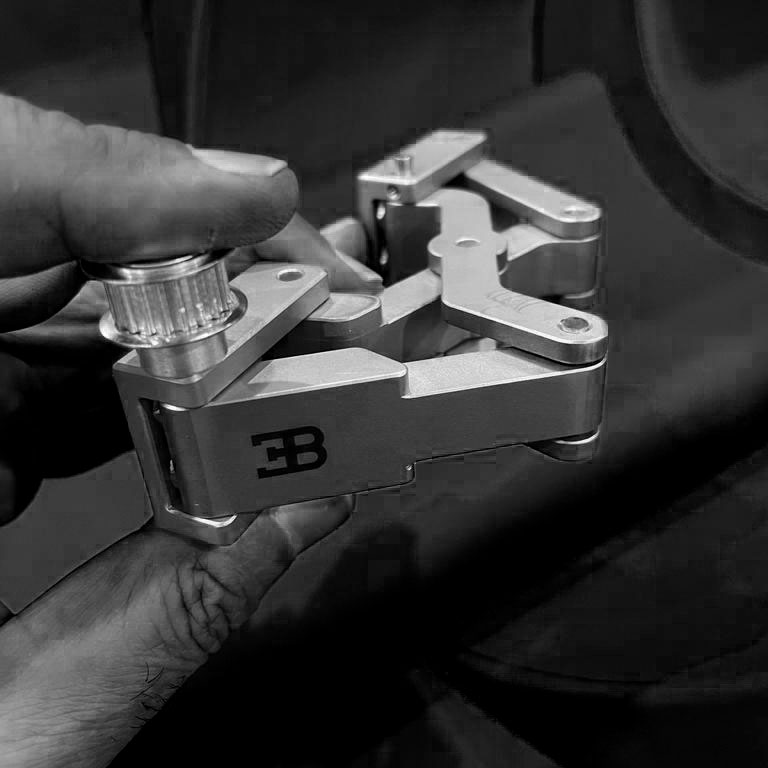 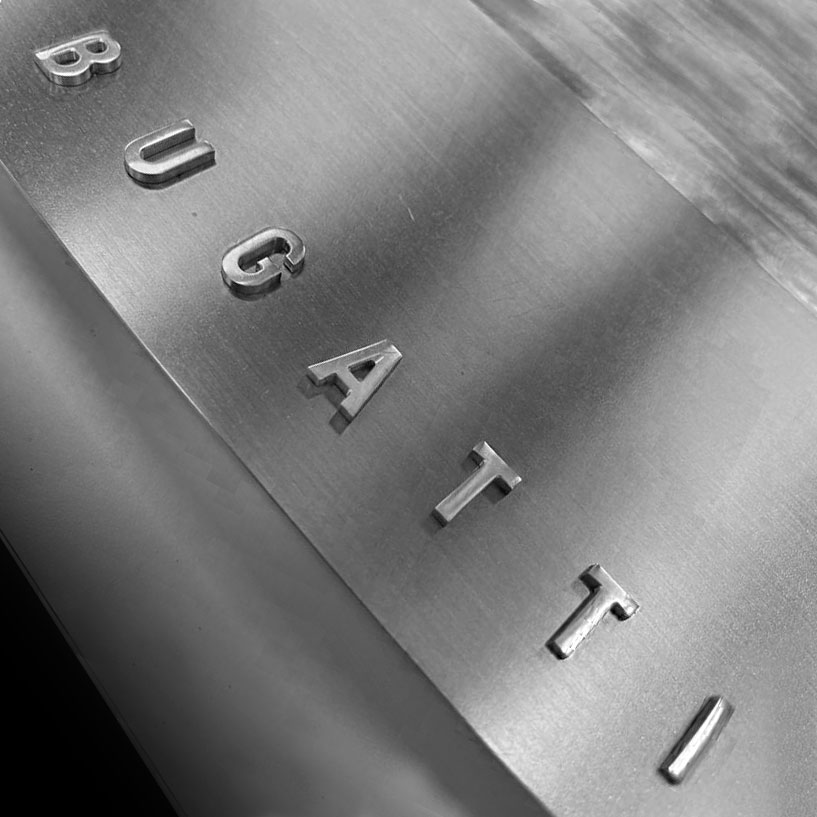 No less than 150 hours were devoted to crafting the finished article, expertly completed by Bugatti partner IXO. A total of 314 individual sheets of prepreg carbon fiber – no different to the material found in Bugatti’s hyper sports cars – provide a shapely cocoon which holds a solid-state thermodynamic cooling cell within, alongside 14 high-end fans circulating cool air.

To reveal La Bouteille Noire, the gentle push of a stainless-steel button is all that is required. Behind doors trimmed with laser-cut aluminum – imitating the central fin of the Type 57SC Atlantic – and hinged with a unique transmission, the neck of La Bouteille Noire is gently released upon opening.

La Bouteille Noire rests upon an illuminated vivid red base that has been recast in the exact design of La Voiture Noire’s elegant rear light – one flowing lit panel, with no joints. A sumptuous interior is trimmed in fine Havana Brown grain leather – the very same found in La Voiture Noire.

“With La Bouteille Noire, the notion that Bugatti’s creations stretch beyond the realm of cutting-edge engineering and design and into pieces of art has never been truer. When we set out on this project working alongside Champagne Carbon and IXO, we knew that nothing less than perfection would be acceptable. The philosophy of both our modern-day hyper cars as well as our historical icons is rich within La Bouteille Noire.

“I’m very much looking forward to collaborating further with La Bouteille Noire’s new owner to customize this unique piece of sculpture. We will be utilizing the combined expertise of our Molsheim designers and craftsmen and women to represent the customer’s personal sense of style in stunning form.”

At IXO, good is never enough. We strive for perfection and the goal of ultimate quality in every aspect, and that is a moving target. Whether it is beauty, luxury, elegance, exclusivity or durability, we make sure to raise the bar. 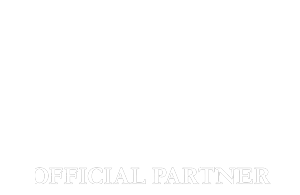